Chili didn’t have a drum scanner when he was first starting out, or a professional photography studio. After he’d finish a painting, he’d set it up in the on the deck out by the pool and get the best pic he could with whatever digital camera we had on hand. (And yes, for a few years there in the early 2000s Chili was the classic “starving artist”, except with a swimming pool. We’d lucked into an incredible house in Pemberton before the market there really took off. Shout out to Tracy and Dave Beattie for keeping the rent at human levels too. Best landlords we ever had, hands down.)
In any case, this means that much of Chili’s early work was never captured in a format that would work to make prints any larger than a dozen or so inches wide. And since his work always sold quickly, there are a lot of “lost” pieces out there.
But not all. Thanks to his Masterpieces show at the Audain Art Museum in June of 2017, many of Chili’s classic pieces were professionally photographed by Hemlock Printers and will be available as prints. Starting right now…
On the 3-year anniversary of his passing, Chili’s estate is pleased to release three previously unavailable prints from 2000-2005, painted during the years that saw Chili quit his job(s) and focus entirely on building his life as an artist. 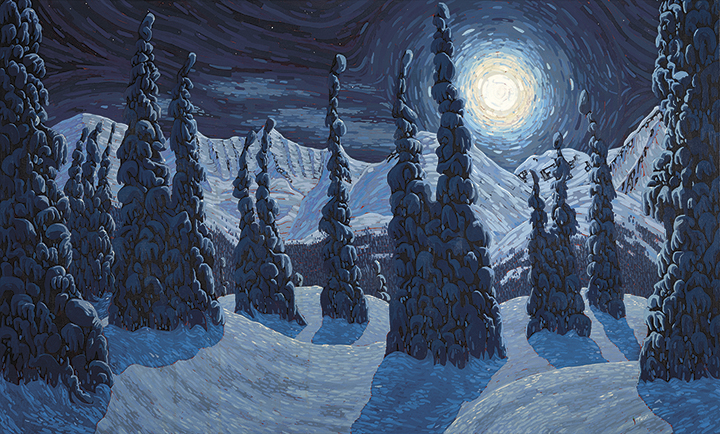 circa: Feb 2000
This one is incredibly special. The first painting Chili did after witnessing our good friend Brett Carlson pass away in a ski accident. Chili, trained in wilderness first aid, was at the scene of the accident and did everything he could… he watched Brett take his last breath. Like everyone who was present that day, the pain of that terrible accident haunted Chili. After a month of shock and sadness Chili found solace where he always did, in his art. From a cramped basement suit in Whistler, he began working on this piece, at the time one of the largest he had ever done.
Slowly, over the month it took to complete, Chili began to heal. We headed back into the mountains and remembered how to appreciate the beauty of a place that can take as much as it gives. Chili painted the Armchair glacier a number of times in his career, but this was the first time and he never painted it this way again, partly obscured by trees—a very realistic and unglorified view. Perhaps to highlight the idea that where we are matters as much as where we hope to go.
Chili always talked about painting to capture a moment or a feeling of being out there in nature, watching time slide past. In this piece, I think you can feel that deep melancholy mixed in with the beauty. It’s a cold full moon in February, you can feel the bite of a winter night in the mountains. Chili titled this piece “A Cool Fifty”, in homage to Brett (who had estimated that to be the size of the road gap that eventually took his life, in reality it was much bigger), but I can’t help but wonder if that title is also meant to instill a sense of the sub-zero chill of a night in the mountains, and a heart that’s just lost someone it loved.

circa: summer 2002
A large commission for a friend and artist Chili admired, “The Tantalus Range” was painted in Pemberton, a year or so after Chili made the leap to live as an artist full time. The perspective, with Black Tusk in sight, was chosen to match the view from his friend’s home, tucked in the forest on the western flank of Whistler Mountain. In the foreground you can see some early examples of what would become the iconic “Chili Trees.” The sky utilizes Chili’s style of letting the eye do the blending rather than the paintbrush, but the brush strokes are shorter compared to the longer, more graphical lines he would use in later pieces like “Across the Valley”.
This original is 60-inches wide or so, quite large, and I remember Chili struggling with how to paint the glacier, “There’s just so much white.” A decade and a half later, there’s a lot less ice on those glaciers but catching the Tantalus range at sunrise, or anytime, still feels the same—“Welcome home.”

“Things Are Looking Up” 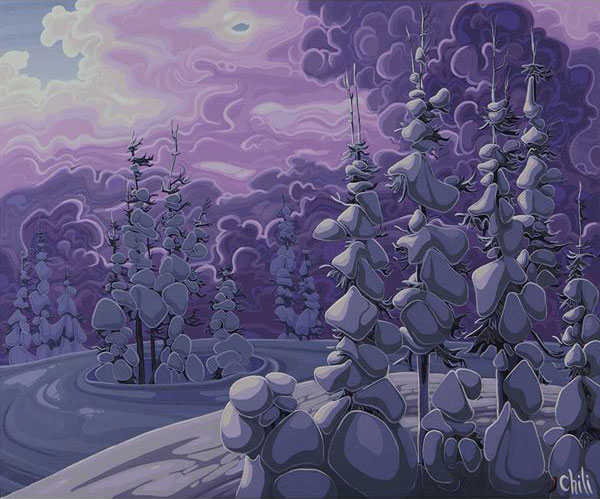 circa: 2005
Not much is known about this piece, but it is definitely a solid example of the “Chili Trees” that would go on to become synonymous with his work. Chili once told me trees were his favourite things to paint, “Trees. Heavy snow-laden trees are fun because I can dream about pow turns while I paint them.”
The title of this piece is also interesting. Chili often struggled to come up with a unique title (as opposed to something like “Snowy Trees 17”) and he would often pull from what was happening in his life. By 2005 Chili’s style was beginning to feel established (the trees, the lines and longer brush strokes in the clouds) so it’s possible the “looking up” in the title reflects more stability in his art career after a few years in the trenches after giving up a lucrative gig serving tables at legendary Whistler spot, Sushi Village.
In any case, I hope these pieces speak to Chili’s fans and help us all appreciate the stunning beauty of the world around us and realize the importance of time spent in nature, alone or with our loved ones.

These new prints are available in paper or limited-edition canvas versions and can be found in Chili’s store (after December 1), or pick them up in person at the Arts Whistler Holiday Market this weekend (November 30-December 1, 2019) at the Westin Whistler.