Chili in the Brett Carlson Lounge

Chili in the Brett Carlson Lounge

Last Friday, I had the pleasure of hanging an “Across the Valley” print in the Brett Carlson lounge up at the Kees and Claire Hut in the Whistler backcountry. Brett passed away in front of his closest friends while attempting a road gap ski jump in Whistler in January 2000. Chili was on the scene and administered first aid, he watched his friend take his last breath.

Grief counselling was not a common thing in those days, we certainly didn’t receive any, and I know that day affected Chili for the rest of his life. As a group, Brett’s friends banded together and raised funds with the idea of building a backcountry cabin somewhere in the Whistler backcountry to help remember Brett and immortalize his adventurous spirit. We wanted to turn the shittiest thing in our lives into something positive.

But it’s incredibly difficult to build a legit backcountry cabin, and the renegade ones are often dismantled by the authorities. So when a chance came to team up with the Spearhead Huts Committee, Brett’s friends, led by Damian Cromwell and Joe Lammers, leaped at the chance, putting all our fundraised cash into this new project.  The Hut Society cleared many hurdles, raised millions of dollars and brought together tens of thousands of volunteer hours from a list of people far to long to write here, and earlier this month the first Spearhead hut opened to the public.

The “hut” is much more than a simple shack, instead it’s a two-storey, 2500 square-foot facility located above Russet Lake at the foot of Fissile mountain. Warm, dry and with incredible access to Garibaldi Park, the hut will serve as an emergency shelter and basecamp for skiers, splitboarders and hikers venturing along the Spearhead Traverse, a world class high alpine route connecting the Whistler and Blackcomb alpines.

Entirely funded through donations and built by volunteers, The Kees and Claire Hut is the most kick-ass hut in Canada and raises the bar for what is possible in public access backcountry shelters. It sleeps 38 people, has power, a beautiful kitchen with stoves, a fireplace, a gear drying room, and state of the art waste-separating toilets. Not to mention jaw dropping views out every window and in every direction.

The event on Friday night was meant to bring together key players in the hut’s creation as well as the families of the loved ones whose names are immortalized in this incredible building. Cornelius “Kees” Brenninkmeyer and Claire Dixon, ski mountaineers who passed away in January 2007 on a 30-day ski traverse in the Rocky Mountains, the hut is named after them. Barbara’s kitchen, a glistening stainless steel affair far better stocked with crockery and utensils than most homes, is named after Barbara McGeogh, a passionate adventurer from Vancouver who passed in 2016. Downstairs on the sleeping level there is a youth bunk rooms in memory of Mischa Arnott, a young mountain lover who passed away in 2018. The custodian quarters is dedicated to Eduardo Campos, a keen outdoorsman who spend much of his life exploring the mountains of BC.

And the Brett Carlson Lounge is a place for travellers and adventurers to come together after another fine day in the mountains, and share stories, make friends and perhaps take a shot out of Brett’s shotski mounted on the wall. So alongside Damian, Brett’s parents, the Dixon, Arnott and Brenninkmeyer families, and some of the key staff and builders of the hut, we poured some fine Jack Daniels into Brett’s shotski and shared stories, laughs and the camaraderie that happens when you collect good people in an amazing place. To have a piece of Chili’s art and spirit in the room with us made things that much more incredible.

Mount Fissile is an icon of the Whistler landscape, I hiked up there with Chili and a mutual friend Karen Kogler once to watch the Perseid meteor shower in early August 1998. It was an incredible night and one I have already written about here. Chili only painted Fissile once, in 2001, (see below). It was a small canvas that currently hangs in a friend’s home in New York. Maybe one day we can get it scanned and printed for the Kees and Claire hut, but for now mountain travellers in Brett’s lounge can relax and enjoy “Across the Valley, my favourite Chili landscape.

You can book nights at the Kees and Claire Hut, or donate to help finish the Spearhead Huts project, on their website. They are still raising money to complete the solar power and water systems. 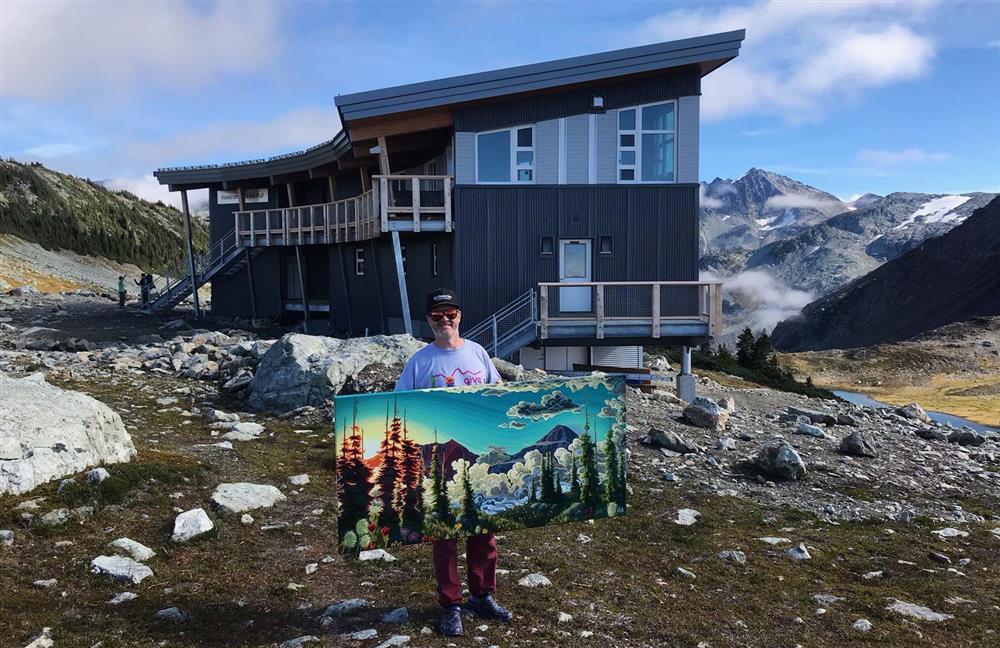 Feet Banks holds Chii's "Across the Valley" in front of the Kees and Claire Hut, and Fissile Peak in Garibaldi Provincial Park. 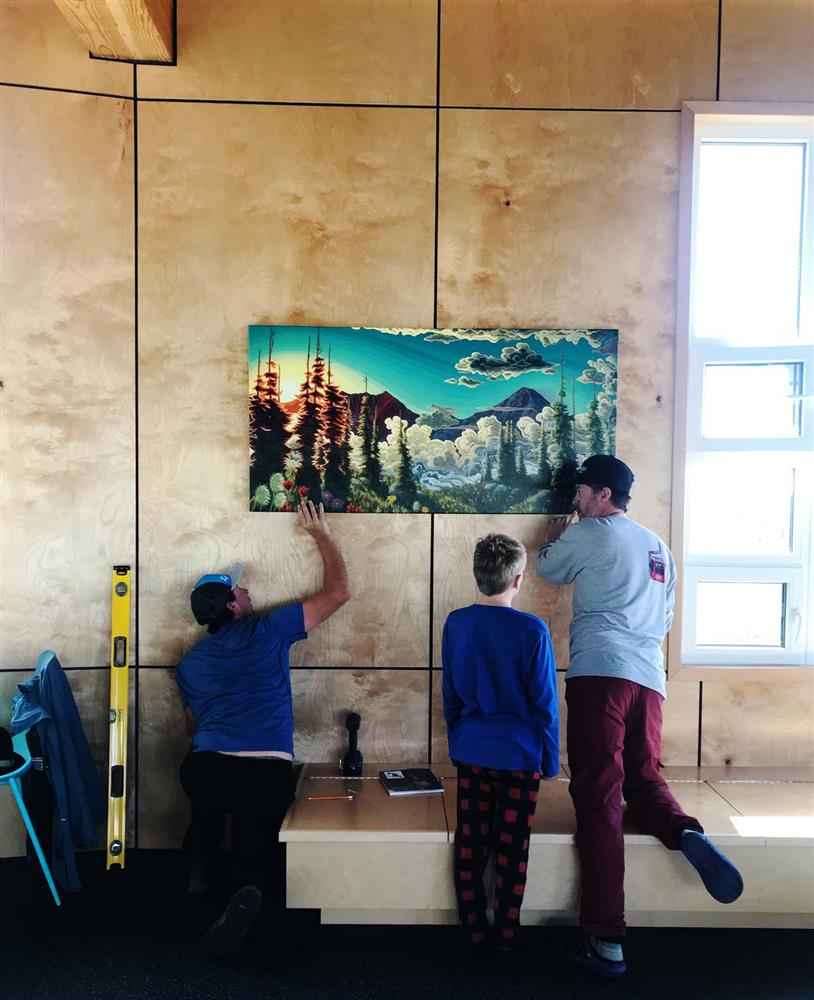 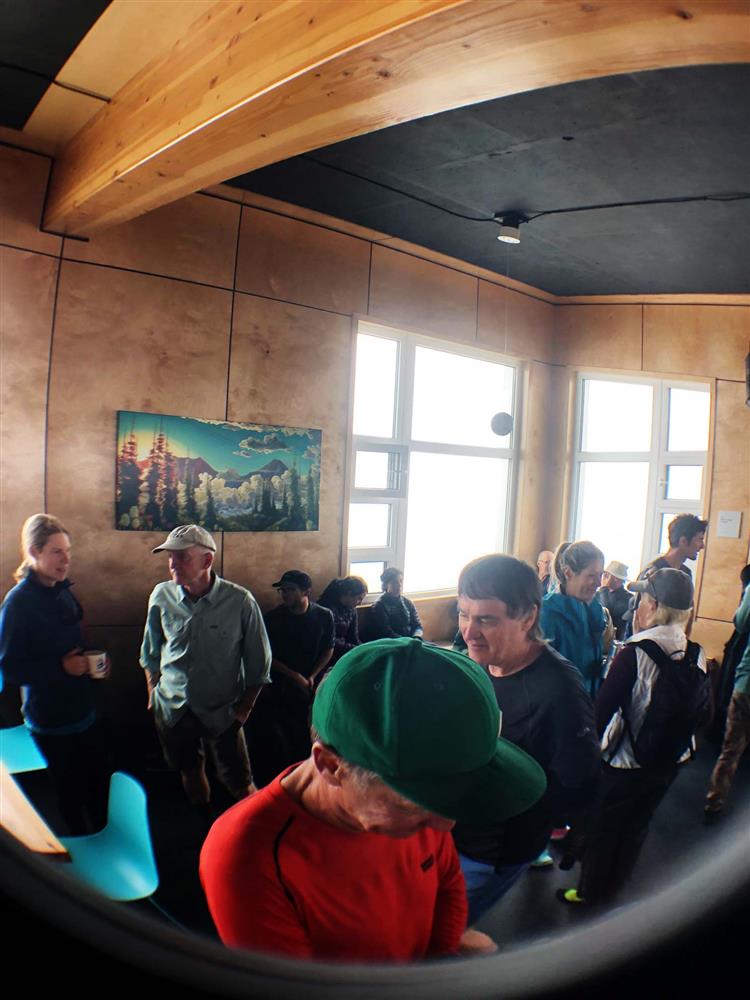 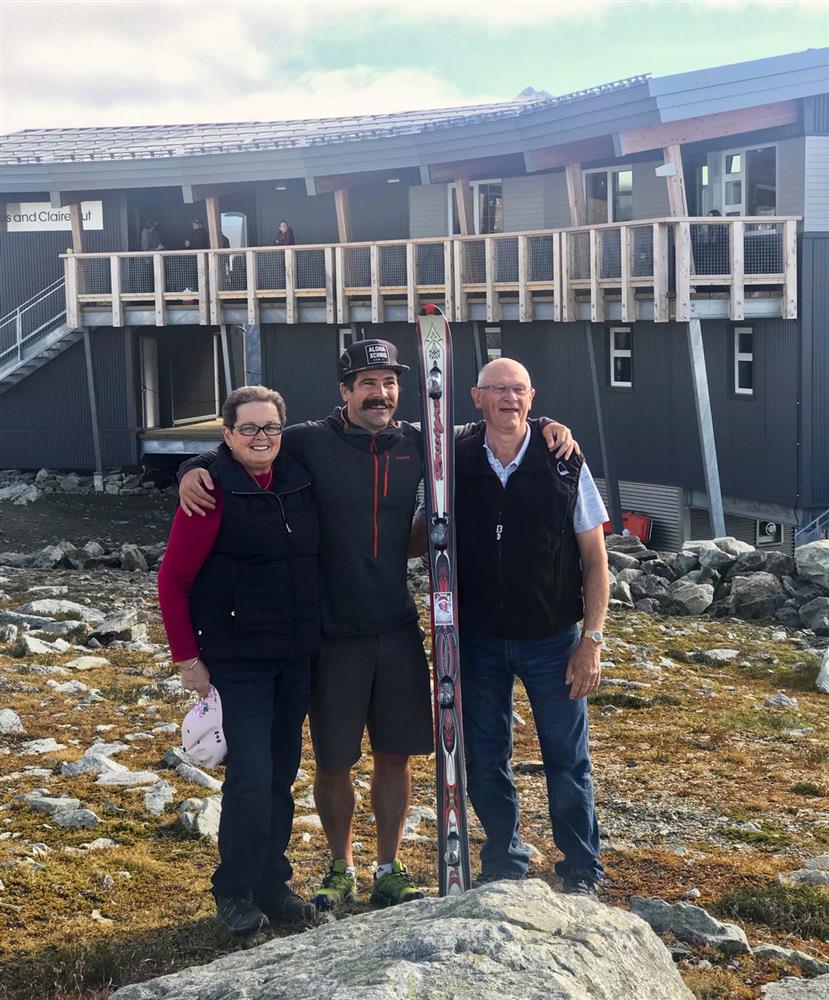 Anne Carlson (Left) Damian Cromwell and Murray Carlson with Brett's shot-ski. The mate to this ski hung in the nearby Himmelsbach Hut since Brett's passing in 2000. THe skis are now reunited in the Brett Carlson Lounge 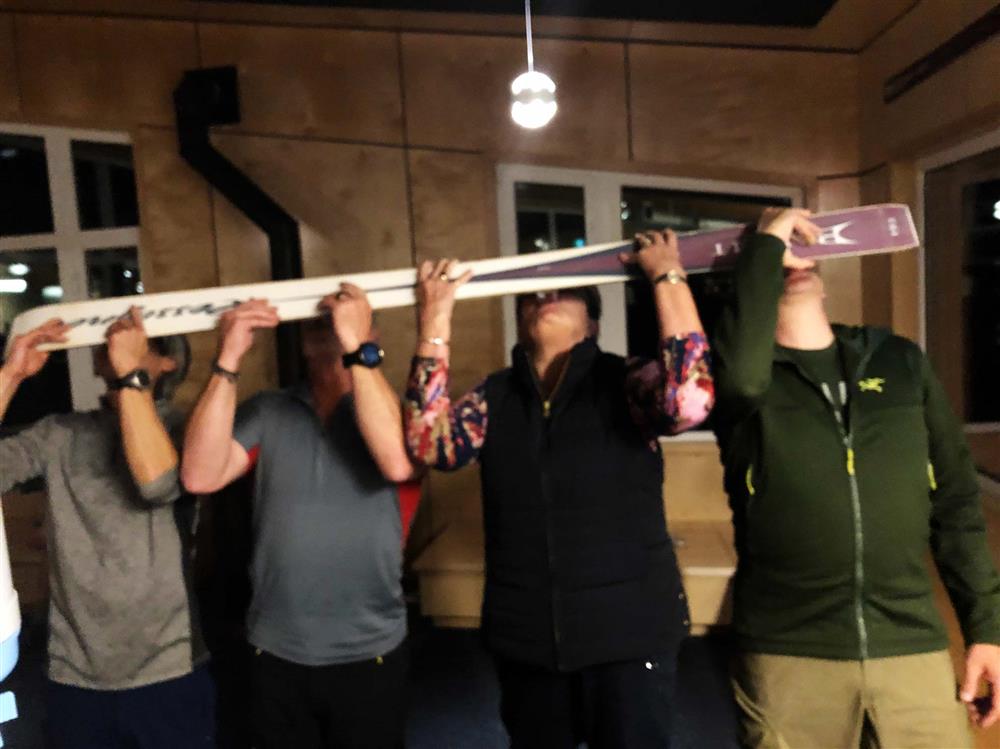 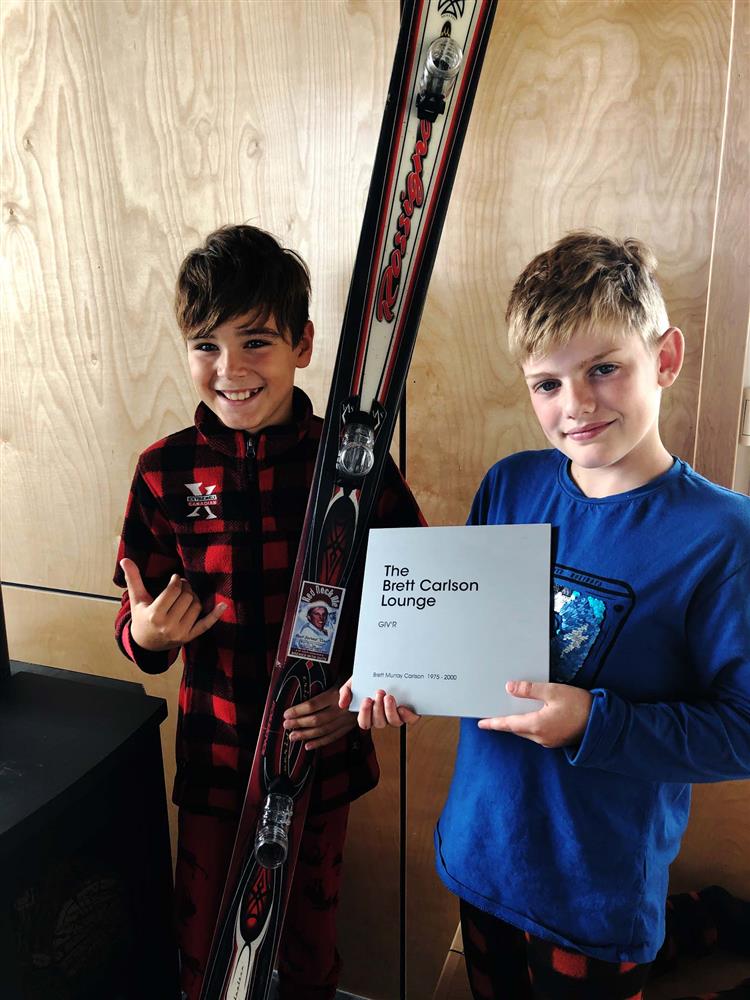 To think that this lounge will be there for these two to stay in, ski from, and make new friends over shot-skis is a heartwarming thought. 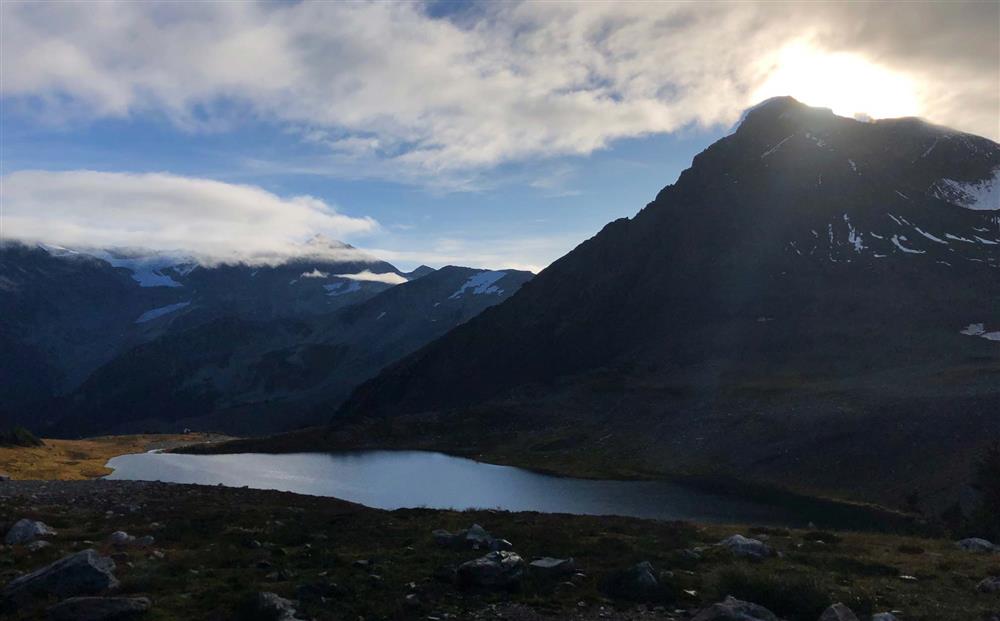 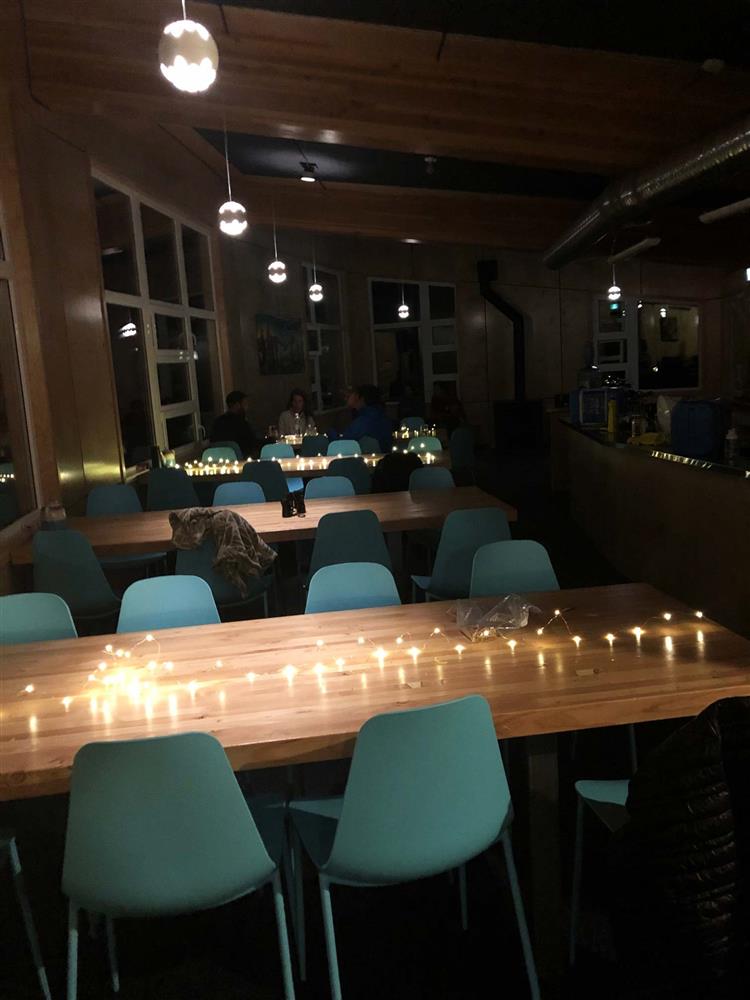 Leave your comment
Comments
Guest
10/3/2019 10:39 AM
What an amazing venture! Making me cry Feet... your hike up there with  another friend we lost Karen. Too many friends lost....
Blog search
Blog archive
Popular blog tags